Allyson and I left Philly on Wednesday for our study abroad in Prague! We had an overnight flight from Philly to Paris and then a layover before taking a small plane from Paris to Prague. Below is the view from the CDG airport. Our flights went pretty well although they were extremely long. CDG is a much more beautiful airport than Philly. All the attendants wore suits and spoke so beautifully. Our only problem came when we tried to find our shuttle from the Prague airport to our dorm. The driver was not there when we got to the waiting area, but we were too tired to figure out what to do so we just sat there and he magically appeared twenty minutes later. 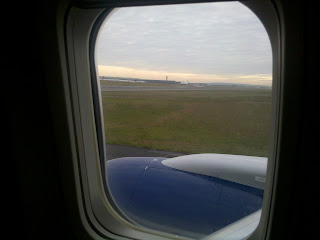 Our dorms, which I will take a picture of later, are very, very plain looking and kind of small, but since we don't have much stuff that doesn't seem to be a problem.

Allyson accidentally blew a fuse in the first few hours of being here when she tried to plug in her alarm clock. The lady at the front desk didn't speak English so we had to pantomime what happened to her. However, she didn't know how to fix it so we didn't have power till morning. Showering was kind of tricky in the dark..

Our first full day in Prague was absolutely beautiful. The sun was shining and everything was just breathtakingly gorgeous. After we got our Charles University ID cards made, we got a tour of the main building of Charles University which is the middle building in the picture below. 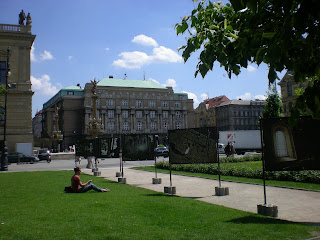 For lunch, we bought really good sandwiches at a shop close to our school and sat by the river to eat them. It was unbelievably beautiful. There were many people sitting on the benches or lounging in the sun on the grass. People were even doing cartwheels. It was surreal.

We also had our first Czech language class yesterday. Our teacher is about five foot tall with bright red hair and dresses "punk" as one of the other Czech professors described her. This included leggings a camo printed skirt on the first day even though she's a grandmother. She's super spunky and interesting and makes Czech seem a little less impossible even though it still seems like a stretch to say I will ever understand any of it. 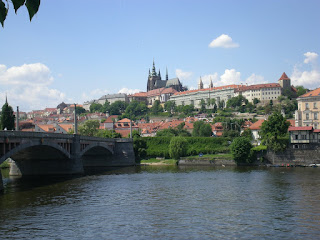 After class we went to Tesco a huge department store that was kind of like a high end Walmart to get some supplies. It was interesting seeing where normal Czech people shop on a day-to-day basis. They also had a big grocery store in the bottom floor so we bought some groceries. I think I will purchase most of my meals through take out or restaurants though because it has been pretty cheap so far. I have yet to pay over $10 for a meal even at sit down restaurants. For dinner the program took us out to eat at a medieval Czech restaurant with fabulous food.

Today, Friday, we went on a tour of the city. I will put up more pictures of that next time I post. But in the picture across the river (above), our dorm is behind that castle in the back and our classes are right near where I took the picture from. It's about a thirty minute walk, but pretty quick and easy if you take the tram.

Well I guess it's time to Czech out (I can't get enough of Prague puns.)